Sign up for our weekly Homes & Properties newsletter, featuring homes for sale, neighborhood events and more.

A winding one lane road lined with tall trees leads to the house. “It’s like being in the forest,” the woman said. Visitors can see the lake through the family room windows as they approach the front door. / Photo by Trent Bell

At the end of a busy week, this Boston family of four exhales slowly as they make the journey, two Bernedoodles in tow, to their cherished Lake Winnipesaukee retreat. “We go up on Friday evening, exhausted, but when we see the lake, all the minutiae disappear,” the woman said.

Easy lake access for boating, swimming, paddleboarding, etc. was key in choosing the 2.4-acre property, consisting of two adjoining lots. “My husband walked down the dock and poked the water with a stick to make sure he would be able to get a cannonball out of it,” the woman laughs.

The couple hired Whitten Architects to help assess several sites (without a stick) and ultimately design a family resort. Nearly five years later, a 5,100 square foot main house and 1,600 square foot guest house with a chain of trees and a fire pit between them, as well as a barn-like boathouse and a separate bathing dock, now occupy the gently sloping, wooded lot. 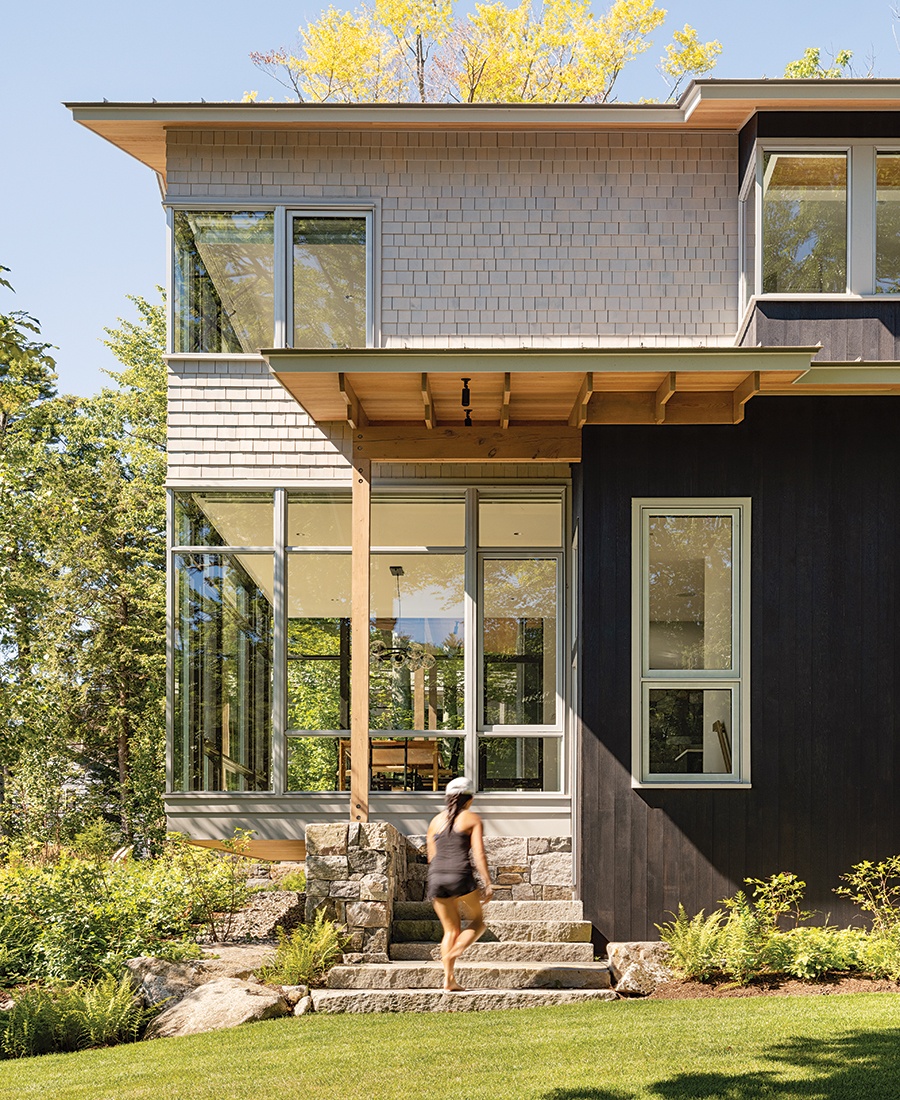 Granite slab stairs lead to the summer mudroom on the lake side of the house. The main changing room is at the front of the house. / Photo by Trent Bell 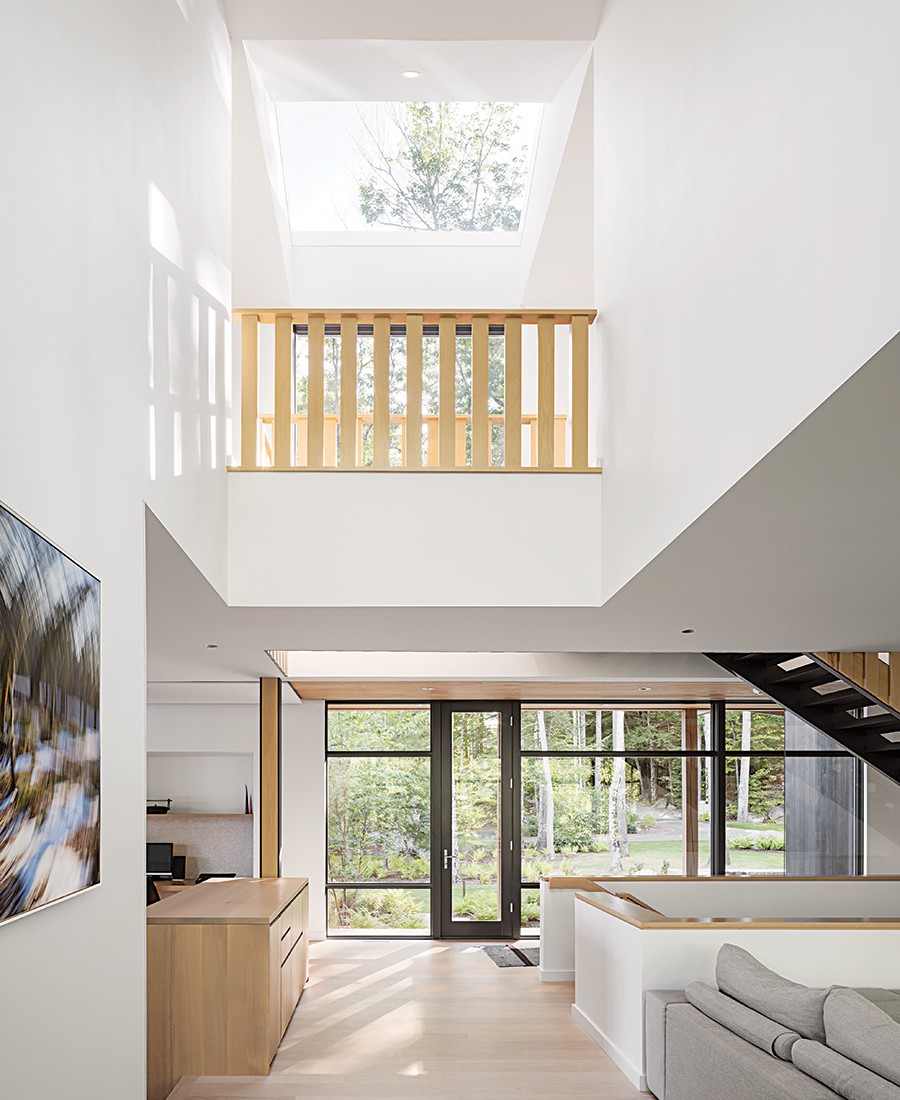 Interior designer Kelly Healy designed the buffet-style bar that serves the kitchen on the left, the music room on the right, and the courtyard patio on the right. Above, the mezzanine connects the children’s bedrooms to the master suite, while the skylight fills the center of the house with light. / Photo by Trent Bell 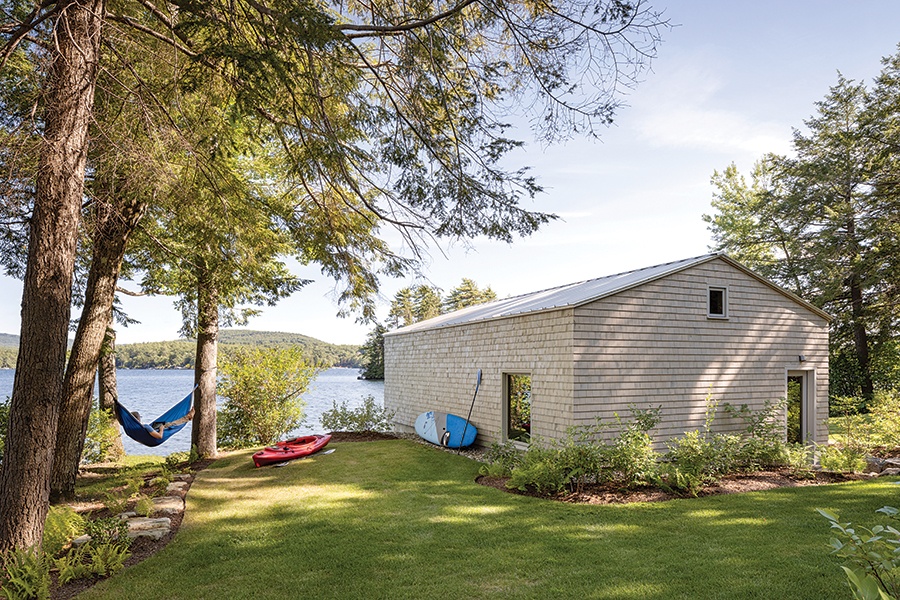 While many boathouses on Lake Winnipesaukee feel grand and end up rivaling the main house, this one reads like a utilitarian building thanks to its barn shape. / Photo by Trent Bell 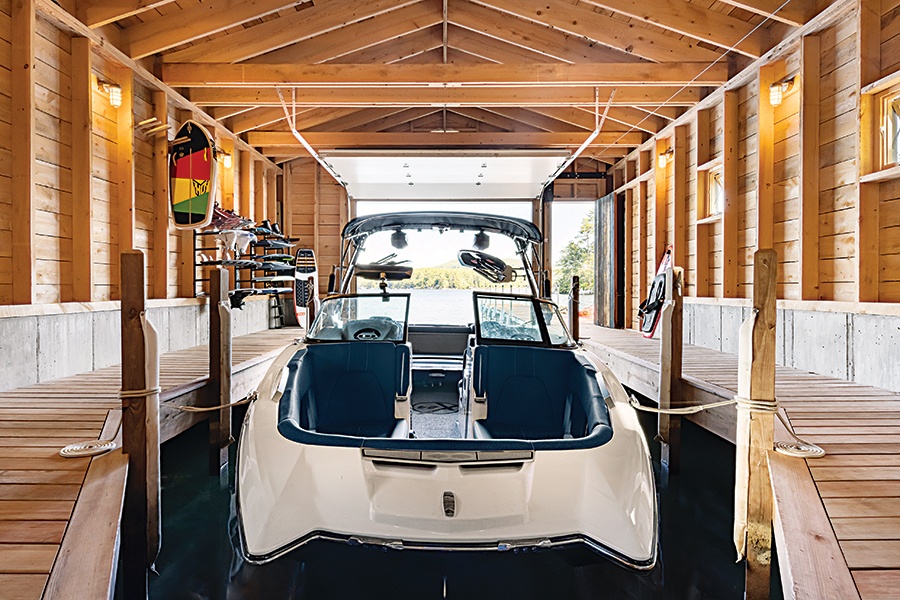 Although the exterior of the boathouse is unassuming, the hemlock structures on display inside are a fun surprise. “It’s a tribute to the old encampments on the lake,” says architect Russ Tyson. / Photo by Trent Bell 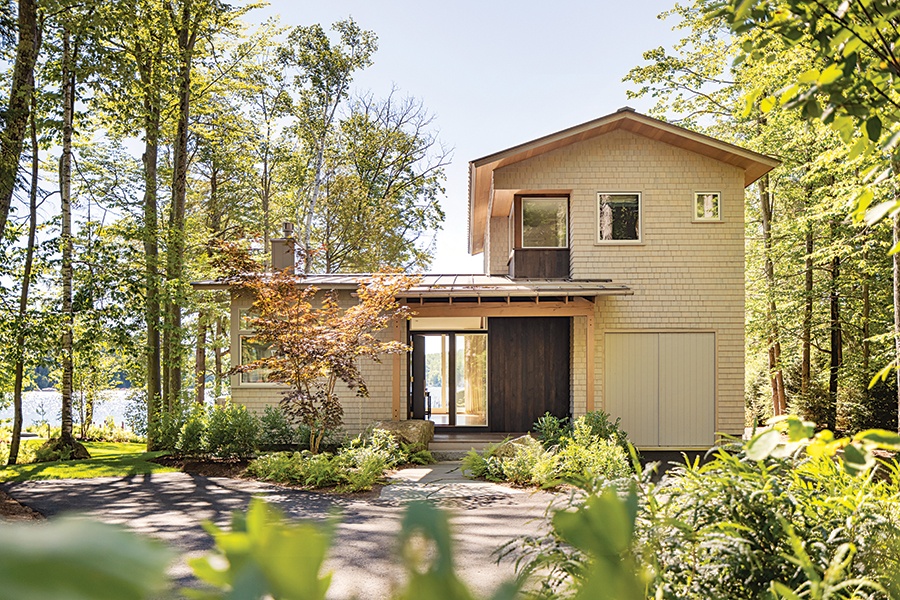 A path from the courtyard leads to the guest house, where the family lived while the main house was being built. / Photo by Trent Bell

The company’s site-sensitive attitude and modern aesthetic with an eye for craftsmanship appealed to the couple, who wanted an airy, uncluttered home that felt like an extension of their surroundings. “We were very influenced by traditional Asian architecture, light and the relationship of buildings to the landscape,” says the husband.

The exterior’s cedar shingles and vertical cedar planks nod to New England and Japanese aesthetics, as do the carport’s Douglas fir structural elements. “The exposed details give the house an informal look, like the uninsulated summer camps around the lake,” says Whitten Architects principal Russ Tyson. “They are a tribute to this tradition, as well as to Asian vernacular architecture.”

The granite fireplace, low granite walls, and granite slab steps ground the building physically and metaphorically (New Hampshire is the granite state, after all). “The stone roots the house in the site and in the tradition”, explains the architect of the project, Tom Lane. 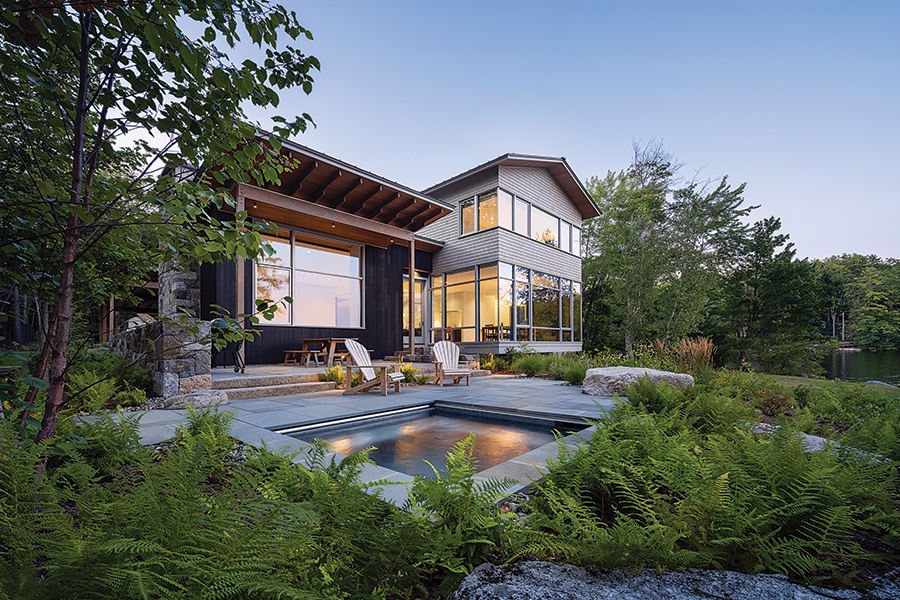 Native ferns planted around the hot tub help the patio feel connected and connected to the natural surroundings. “That’s why you’re in New Hampshire,” Lane said. “We wanted to emphasize that.” / Photo by Trent Bell

A strong yet simple material palette of white oak juxtaposed with blackened steel and ebony speckles defines the interior. “Clients wanted the house not to be a centerpiece,” says Kelly Healy of Belhaakon, who handled the interior design of the main house. “I interpreted this as high quality and functional, but not fancy.”

Distant views of the lake draw visitors into the house. “You enter from the north, then you head into the sunlight and the water,” says Tyson. From the lobby, it’s possible to watch family and friends jump (and even cannonball!) off the dock. “It’s about dissolving the boundaries between the inside and the outside,” says Lane. “We invite the lake and the dock right to the front door.

At the end of the hallway, nestled around the corner of the oak and steel staircase, the architects created a similar effect in the music room, merging the house with the trees. It’s a “floating glass box in the woods,” Tyson says of the cantilevered space. “This view is completely different from the lake view; that they are unique makes both experiences better. 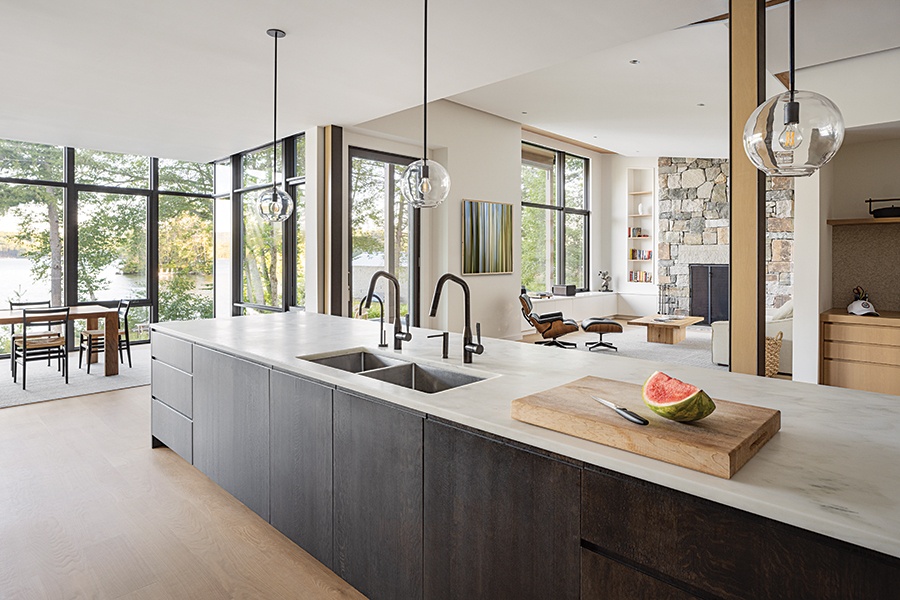 Most of the interior of the house is visible from the kitchen sink. The ebony hue of the base cabinets continues the high contrast language of the overall design. / Photo by Trent Bell 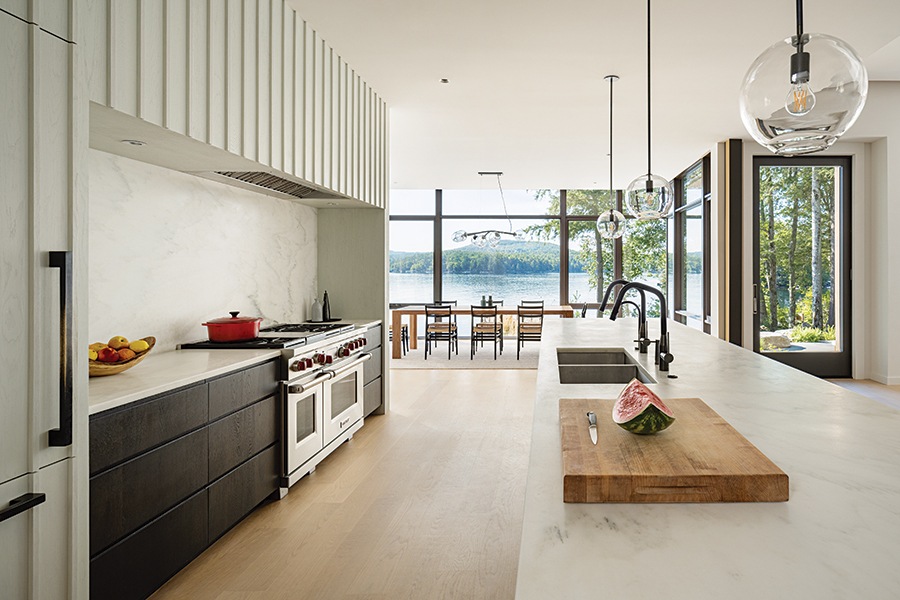 The plank and slat joinery on the stove wall is coated with a translucent stain. “You can see the grain of the white oak going through,” Healy says. / Photo by Trent Bell 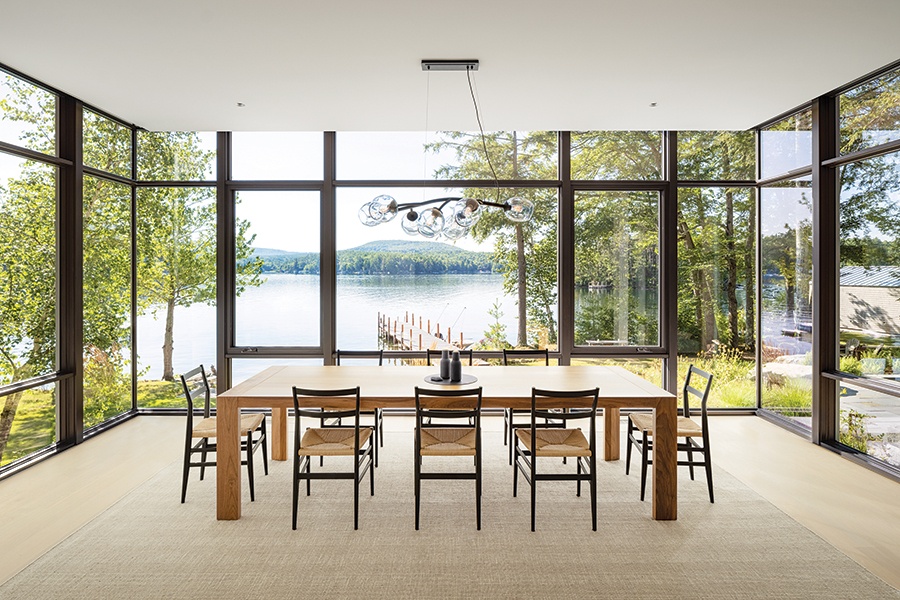 In the dining room, the tatami-like rug from Fall River-based company Merida speaks to the sense of craftsmanship and Asian aesthetic the team wanted to evoke. / Photo by Trent Bell

The adjoining kitchen and dining room, located just after the stairs, is the center of the house. At the request of the owners, the spaces surrounding it – the music room, the courtyard and the family room – are visually and audibly intertwined thanks to large openings between each one. The family setup makes it easy to get together, even when people are doing their own thing. “They wanted to feel connected to each other no matter what spaces they were in,” Tyson shares. “Rooms are separated, but not removed.”

The plank and slat panels that run along the kitchen wall were Healy’s starting point for the vertical touches she wove throughout the house: the wide slatted screen along the staircase, through example, and the angular slatted vanity in the master bathroom. The vertically channeled headboard in the master bedroom and the bold warp and weft of the tatami-like rug in the dining room are more subtle iterations of the theme. 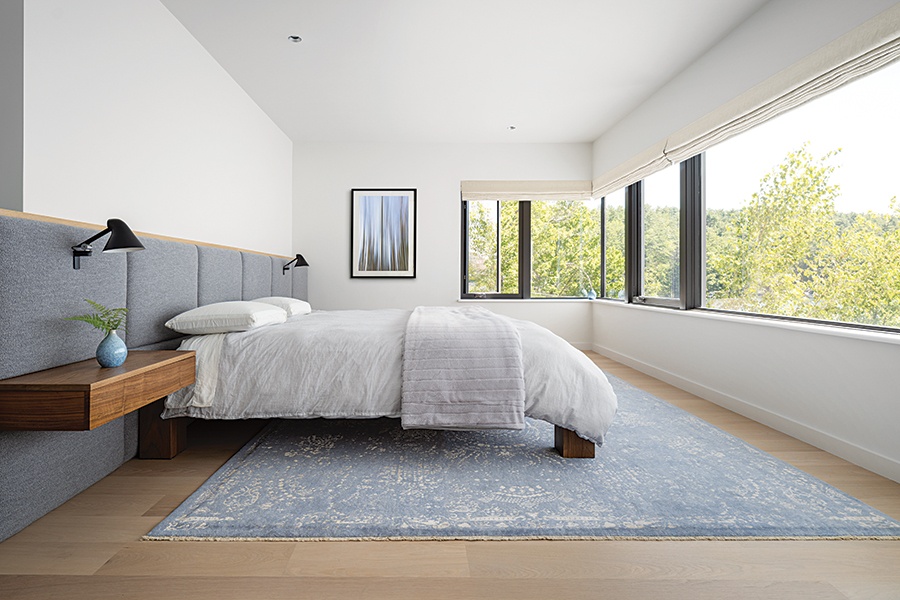 The channeled headboard from Pistol Pete’s Upholstery in Yarmouth, Maine extends past the wall and then rotates 90 degrees to create a capsule with a desk and a view of the lake. The cantilever bedside tables and platform bed with block legs are crafted in rich walnut. / Photo by Trent Bell 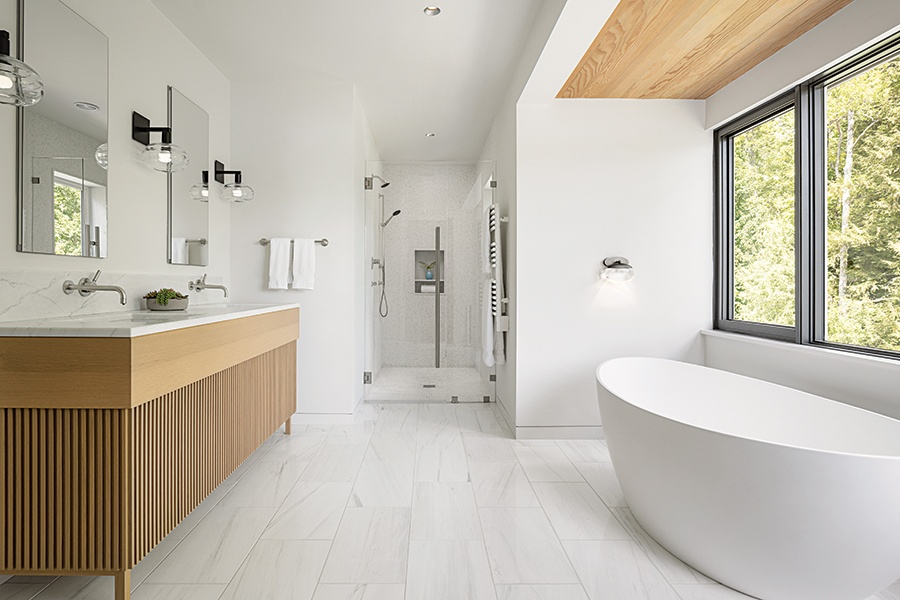 The tub in the main bathroom is tucked away in a nook that juts out into the landscape. The wooden ceiling enhances the effect. The vertical wood slats of the vanity are a variation of the kitchen joinery. / Photo by Trent Bell 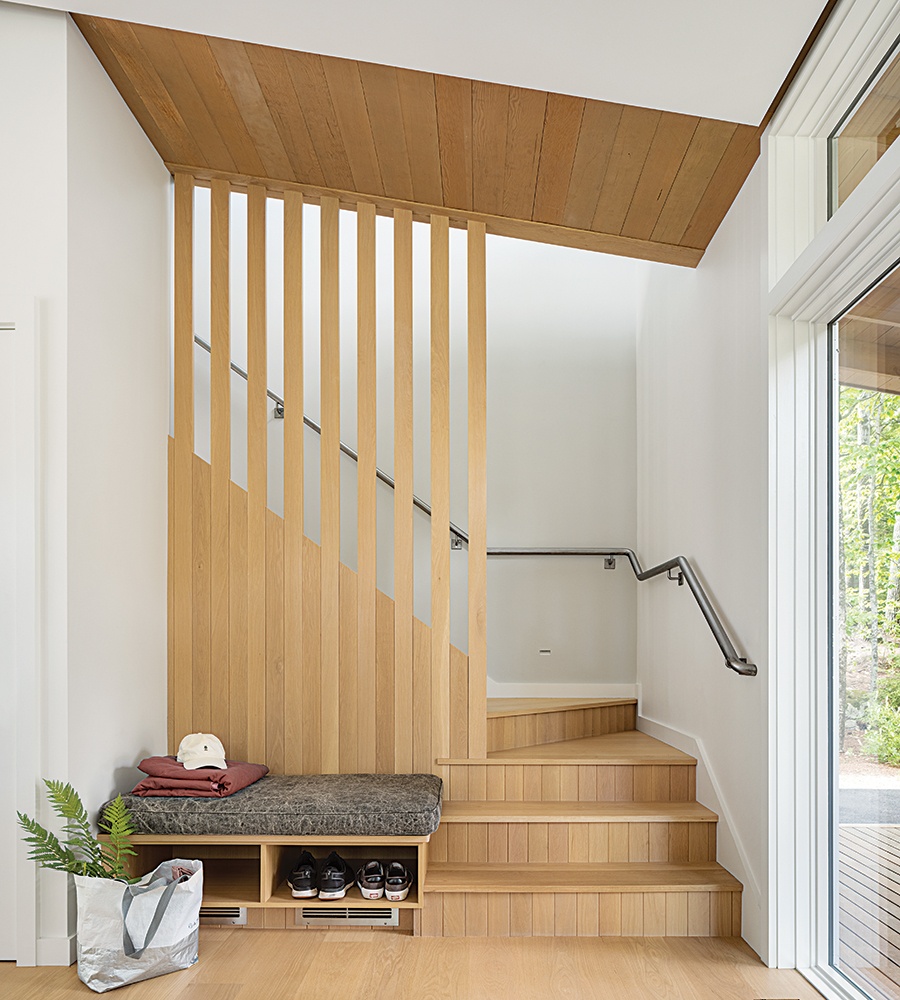 The slatted screen in the entrance of the guest house ties in with the design elements of the main house. / Photo by Trent Bell

Healy says these details evolved from the couple’s request that she capture the “essence” of the places they had visited, including a traditional inn in the foothills of Mount Fuji. With every project, she says, Healy tries to help clients “identify the things that capture the feeling” they hope to achieve. In this case, it was vertical and horizontal lines of screens and Japanese textiles.

The interior was also influenced by the streamlined aesthetic of Korean imperial palaces. The minimalist dining room, with its sturdy table and barely-there chairs with natural rush seats, speaks this language. The space also references vernacular New England architecture: “It’s a modern take on the old screen porches of the camps,” says Tyson, pointing to the arrangement of windows with casement cranks.

This current version of a screened porch cantilevered into the landscape; the swimming dock appears to extend straight from the dining table. This intimate and ever-present connection to the lake resonates with the family. “The house allows us to have a special relationship with water,” says the husband. “The lake is the gift that never ceases to be given, the friend that is always there for you, no matter the season.” 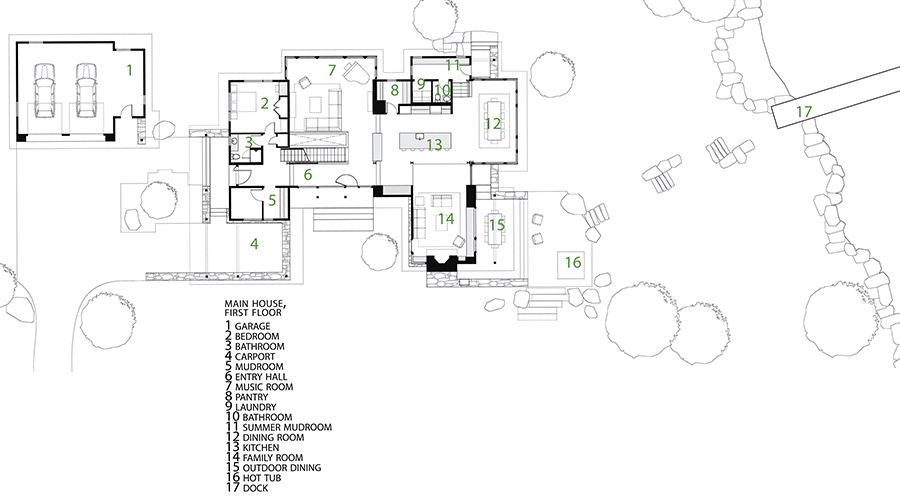 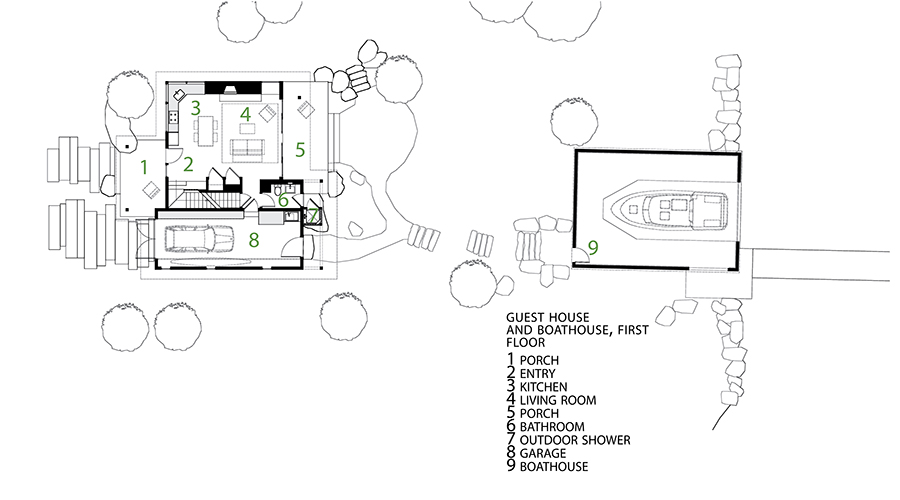